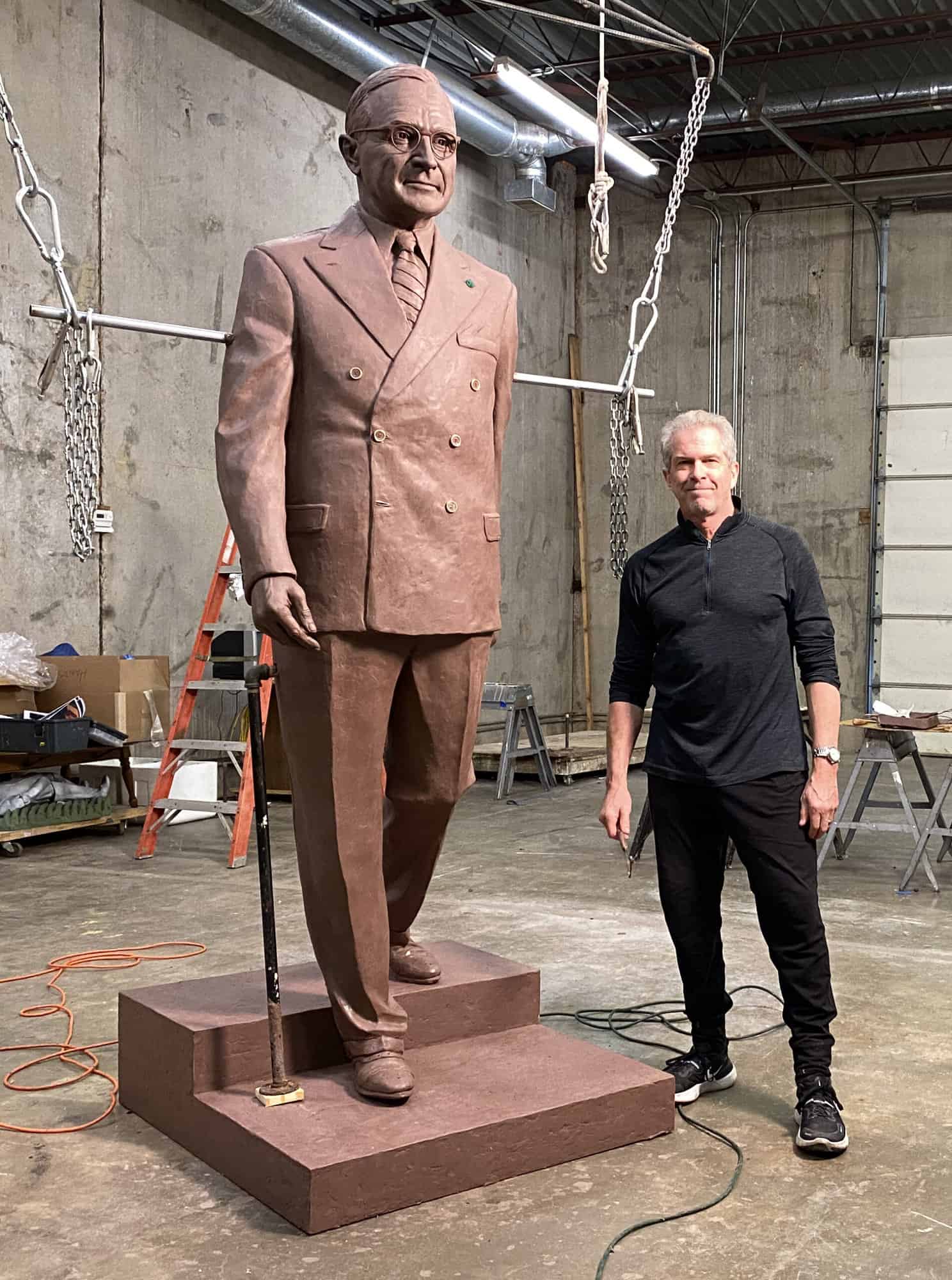 Tom Corbin’s monumental bronze statue of President Harry Truman will be unveiled in the U.S. Capitol Rotunda on September 29th.

“THE WORLD NEEDS TO KNOW ABOUT THIS MAN FROM MISSOURI WHO DID SO MUCH FOR THIS COUNTRY… HE IS A GIANT, AND GIANTS MUST ALWAYS BE REMEMBERED.”
U.S. Representative Emanuel Cleaver II

In retrospect, it almost seems that Tom Corbin’s prolific and evolving body of artwork of the last three decades had directed him to this precise moment—and to this momentous sculpture. By 2018, Tom had arrived at an enviable point in any artist’s life. He was free to choose only those projects that truly interested him and explore whatever new art direction that challenged him. Of late those chosen projects had become more non-objective and more experimental departures from his earlier figurative work.

But what should arrive in the midst of all this heady art freedom but an invitation to submit a proposal for a sculpted likeness of President Harry Truman to be installed in the Capitol Rotunda in Washington DC. This wasn’t exactly Tom’s current focus, but one that would demand Tom’s serious consideration. After all, who could say no to Harry Truman?

Had I been given the opportunity to sculpt Harry Truman much earlier in my art career, it could have resulted in a completely different statue, probably rendered in a more conventional, classic pose. I had done a number of representational figures over the years and had, in fact, begun turning down such commissions to pursue my current non-objective work.

But this was Harry Truman, a President, someone Missourians and certainly Kansas Citians consider practically a neighbor. It would have been unthinkable not to respond to this invitation. Instead I focused on, “What can I do that will really set this apart?”

After absorbing everything I could find about Harry Truman, I felt that this statue should embody Truman’s personality—his character—as well as his likeness. I would use both his recognizable features and his body language to show the active, energetic man I discovered him to be. In so far as a sculpture can, I wanted it not only to look like Harry Truman; I wanted it to “act” like him too.

This definitive Harry Truman statue would be both the Presidential figure that he certainly was and the approachable common man he saw himself to be. That’s not as contradictory as it might seem. But it definitely reveals the influence of my Environments Series, sculptures that capture a certain tension, a moment in time, to give the viewer a sense of the statue’s environment and his place in it. In Harry’s case, that place is in history.

Posing the Possibilities: In Step with Harry

In September of 2018, a letter from the Truman Library Institute notified Tom that he was one of four finalists selected to develop a maquette for the proposed sculpture with the pose, attire, and other distinguishing details left entirely up to him.

Tom wanted the posture, the gestures, the everything about the maquette to reflect not only the physical likeness of Harry Truman, but also the inner Truman, the real human being that occupied the desk where the buck stopped. It was time for a deep dive into the former President.

Already a voracious reader, Tom devoured McCullough’s Pulitzer Prize winning biography of Truman like a textbook. Ditto for Frank’s Trials of Harry Truman. Tom scoured the displays, files, clippings, photos, and myriad memorabilia at the Truman Library in his effort to get to know Harry Truman better than anyone. And, with the luxury of history and hindsight, maybe even better than Harry himself.

Harry Truman, Tom discovered, did some of his best thinking on his feet. Kinetic energy fueled his thoughts and movement kept that fuel pumping. In the pre-Secret Service days, Harry often startled DC natives with his frequent unaccompanied daily strolls. Capturing Harry on the move would be the most precise portrayal possible.

Tom rendered Harry actively descending a step, perhaps at the courthouse in Independence or from the porch of his Independence residence on North Delaware Street. As he takes that step down, Truman conveys confidence, openness, and a welcoming warmth that metaphorically closes the distance between Truman and the person he’s approaching. Just as with all the pieces in Tom’s Environments Series, this sculpture too stretches its bronze confines to let the viewer infer Harry’s next step. The scene could have been a frame clipped from a celluloid newsreel of the era.

The maquette would take two months to complete. It was only three feet tall, but it represented the biggest speculative time commitment of Tom Corbin’s entire sculpting career.

Tom states, “This maquette was never a rough draft. It may have been a miniature at 36 inches high, but I developed it to be as precise, as complete, as if it were the finished sculpture because, to my mind, that’s exactly what it was.”

Once More, Only Bigger: Enlarging upon Harry’s Monumental Life

As precise as the maquette was, enlarging Harry to monumental proportions presented challenges that were, well, bigger.

The proposed design had already come under scrutiny by the Truman Library Institute Statue Committee and members of the Truman family. During an early DC trip that included a personal tour of Statuary Hall and a meeting with the Architect of the Capitol, it was mentioned that, with its moment-caught-in-time pose, this statue “would be a unique addition to the Capitol Rotunda.” Tom hoped this was a positive sign.

Through it all, Harry emerged remarkably unscathed, with only minor modifications. The committee suggested a slight softening of facial lines. There were no requests to alter the pose.

With approval to proceed to the statue’s final size in October 2020, Tom alerted The Crucible Foundry in Norman, Oklahoma, which would scan, enlarge, and, ultimately, cast the statue in bronze and apply the patina.

Going from mini-me to monumental size, however, required a basic re-sculpting of the enlarged statue’s entire clay surface to bring back all the tight details. By now Tom had committed to memory every line, crease, and curve of his statue. Working at the foundry, Tom rendered the individual segments of the enlargement as exact duplicates of their corresponding sections of the maquette. This took a solid, dedicated week to complete.

The critical hands and head, however, would require an additional six weeks. Tom brought them home to his Kansas City studio to finish. When Tom felt that every nuance, every detail of Truman’s face and head met his own uncompromising standards, he arranged an informal Zoom conference to share this completed likeness with Truman family members and the Truman Library Institute Statue Committee. They were all delighted to offer their final sign-off


From Footnote to Forefront: Harry Truman, Man of Mettle

Harry Truman expected to fade into the obscurity accorded most former vice presidents, a mere footnote in the history of his time. And he was perfectly okay with that. But fate had a different plan for him when Roosevelt’s untimely death and the state of the world demanded much more of Harry Truman.

He was toughened and tempered by war and subjected to extreme pressures he never would have anticipated. He weathered those trials and emerged strengthened. If ever a statesman had earned his likeness in bronze, it was Harry Truman.

“President Truman may be remembered largely in black and white, but he is a 21st century standard for presidential leadership and public service. His story is our story, America’s story,” said Alex Burden, executive director of the Truman Library Institute. “Inheriting a global catastrophe after World War II, Truman shouldered the burden of leadership in a rudderless world with remarkable courage, integrity and humility. That’s why it’s a tremendous honor to lead this effort to bring Truman back to Washington more than 75 years since he boldly led our nation through some of the most dramatic and consequential chapters in America’s history.”