Sculptor Tom Corbin might be best known in Kansas City for the Firefighter’s Memorial sculpture and fountain on West 31st St., but more than 1,000 of his pieces are sprinkled throughout private galleries around the globe.

Corbin founded his flagship studio in a sturdy brick fire house at Southwest Blvd. and Mission Road. Built in 1910, it is a fortress with walls 16 inches thick.

When first opened, it housed stables for the horses that pulled fire engines in Kansas City, Kan. Corbin has spent the last nine years transforming the building into Corbin Bronze, a space to create and showcase his art work.

Scroll around this 360 video to see the artist at work inside his studio: 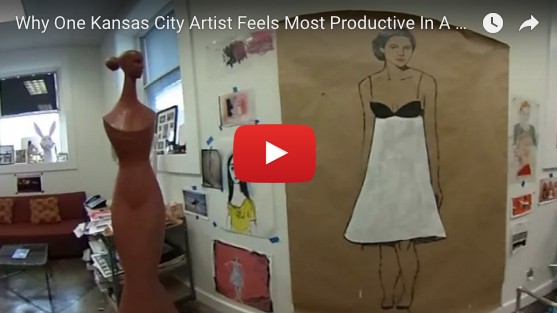 The firehouse was decommissioned in the early 1990s.

“Occasionally we’ll have firefighters that actually worked out of the station stop by because they are curious to see what this crazy artist is doing with it,” Corbin says.

He spends most of his studio time on the ground floor grasping handfuls of warm clay to build models for the bronze sculptures and furniture he creates.

“I am always trying to make up something new and different,” he says.

His daughter served as the model for one recent project, a free-standing bas-relief.

“The unusual thing about it is that instead of a bas-relief that would be on a panel or on a wall, this would actually be a cutout much like a paper doll,” Corbin explains. “It will look three dimensional from afar, and it’s thickest point will probably be four inches.”

Looking to the historical bas-relief sculpture for inspiration, Corbin says he’s trying to put a new spin on an old technique.

“It’s a little tricky just trying to get all the depths of the relief correct,” Corbin says with a laugh. “I know with the Egyptians, you see most everything in profile. I realize doing things in profile is much easier, but I’ll work it out one way or another.”

When Corbin started out as a figurative sculptor back in 1982, he says, his biggest hurdle was learning to step back from his work to get the proportions of the body correct. Working in sculpture takes a toll on both mind and body.

“It is pretty physical,” he says. “I’m standing most of the day so at the end of the day, I’m pretty exhausted.”

He started painting 14 years ago, and says working in a different medium is just another challenge that he enjoys.

“It’s nice having three disciplines,” Corbin says. “I get a little bored doing the same things all the time.”

This story is the first in a series using 360 video to bring readers into unusual studio spaces of artists in the Kansas City area.

Julie Denesha is a freelance photographer and reporter for KCUR. Follow her on Twitter,@juliedenesha.

Link to article on KCUR